Yesterday I woke up sick. I thought about staying home sick until I remembered that no one gets rest with a nine month old at home. I came to work and the events of the day left me cranky so around 5:30 I decided I was just taking the kids home and give them baths and pass out. When we got home Brandon ran to the door that leads from our garage to our house to open it. The door was locked which was very odd considering we have never locked that. Inside my head I thought to myself “Someone is probably in my house right now and they locked the door to escape.” (Yes I really am that paranoid all the time)
We walked in and ran to the bathroom because I had to pee. Brandon stripped naked so that he could get in the bath. I sat Codi down in the car seat and walked to the master bedroom so I could grab the bath seat out of my tub because the boys had used my bath last. I walked up to my bedroom and saw this. 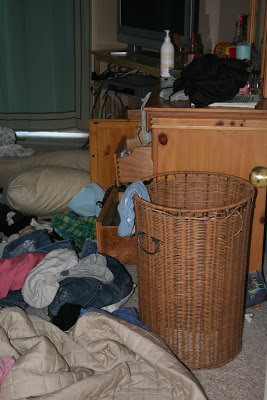 The first thing I thought was, “what the fuck did the boys do now.” Then I looked a little harder and saw this. 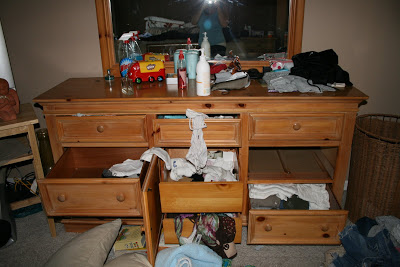 I realized suddenly that something was not right. I peeked around the corner and noticed the curtains blowing and saw a few shards of glass. I turned around grabbed my kids and ran to the neighbors. I did not know if they were in the house or not but I did know I had a few guns in the house and I sure as shit wasn’t going to get shot in my home with my own gun. I called the police from the neighbors house and was told they would get to it when they could. The neighbors mother stays home with their kids all day and she told me she saw two young kids walking out of my backyard around 10:30am. When the neighbor asked why she didn’t say anything she replied, they looked young and maybe Filipino so she thought they were just friends of Robs leaving through the back. I waited a long time and finally I walked over to the house and grabbed a Tshirt out of the garage to put on Brandon. Rob arrived home and since he had his gun he went into the house to make sure it was safe he was sure they would not be there since the lady saw them leave early. He was right. I left the kids with the neighbors and we walked in. the first thing Rob noticed was my worst fear. They had taken two of his guns. Two registered handguns are now in the possession of kids twice described as no older then 17.

Upon further inspection we found the Playstation 3 and Wii had been removed from our bedroom. 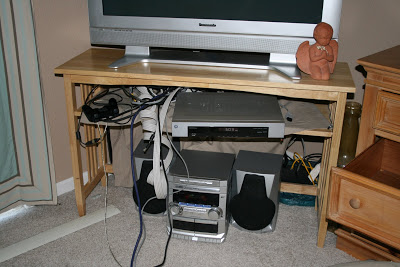 All of the Wii controls, Wii steering wheel things, Playstation wireless cords and so on were gone.

Our closet was totally trashed. The basket there on the floor held every single love letter, flower or sweet nothing I had given Rob. It is all smashed, torn and ripped now.

My jewelry box was hidden under those pants on some shelves. It contained my Tiffany, my 3 pairs of diamond earrings, and a necklace from my husband among other things.

The drawer there on the right IS NOT A DRAWER. They fucking pried wood off wood trying to steal shit.

Our computers were located on my coffee table. We have a floor jack that the charger plugs into. They ripped my couch apart to rip the cord out of my floor even. 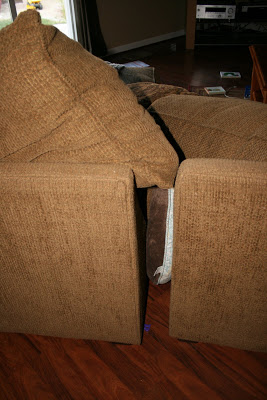 That is where my Nintendo used to live.

This is the back sliding door that I’ve been so terrified of since the day we moved in. It is located right next to my bed. 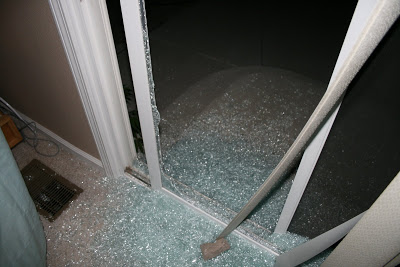 They shattered the whole thing…with one little rock! 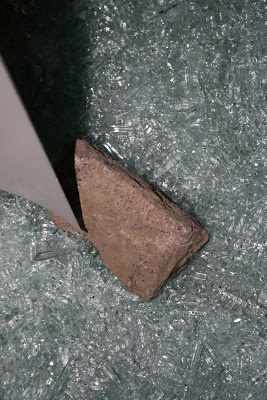 We realized they broke the fence in the back of my house because my house backs up to field. We think since the neighbor saw them walk out empty handed that they stashed everything behind the fence or just handed it over to friends. The police were able to find footprints from my yard up the hill behind the fence. I am going back now to document the rest of the losses since I have no idea what was really stolen. 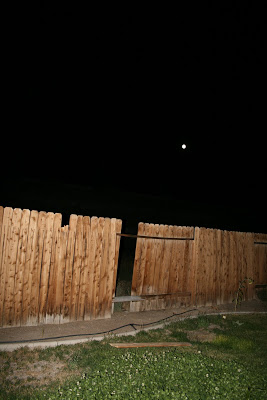 I am only thankful that my family and kids are okay. I’m even more thankful that a week ago our computer guy was here and in a random act of faith he backed up every single one of the 7,000 pictures on my laptop. I’m thankful he set me up with Mobileme and my accounting program was backed up.
I am stunned that this happened just over a week after we had the alarm system removed from our home. It was removed and re-installed into the house we are remodeling. I was so mad that we had it taken out early but that was when the appointment could be done so it was what it was. The odd thing is, if you look in my front window you can see the hole where the alarm was. The boy who lives on the other side of me said two young kids knocked on his door earlier in the day asking if Andrew was home. He said no Andrew lived there so they went to my house.

To answer everyone who asked it is the house we currently live in, not the one we are remodeling. Also, someone asked why I’m not more angry. You were correct in assuming that I was in shock. It feels surreal. I don’t know how I feel about it. My husband is angry, ANGRY! I’m thankful my kids are to young to remember and that no one was hurt.

I’ll update after I speak to insurance.